All mainstream news sources profess to be fountains of factual and unbiased information. Even so, what they report on can’t help but slant in the direction they perceive an event to have happened. Opinions are cleverly peppered throughout articles in undetectable ways, leading readers to believe they are the whole truth and nothing but the truth.

What’s even worse is when a publication not registered as an official news source decides to take a swing in the dark at being one anyway. To say Vanity Fair is not a news source is unfair.

With the possible exception of the publications rival, Cosmopolitan, Vanity Fair is America’s top source for makeup tips, keeping up with the latest fashion trends, and for learning the best 50 ways to leave your lovers. They cover the important stuff.

But just as everyone these days thinks they are a political expert, in reality, many of their assumed facts are based on the interpretation of some reporter they’ve never heard of. They’ve been influenced in the exact way Vanity Fair is now attempted to influence their thousands of loyal subscribers.

When an article, regardless of where it was published, begins with a headline that reads, “Ivanka Trump Faces Off With Father to See How Many People They Can Kill With COVID-19,” you know it’s going to be a doozy. This exact headline is indelibly printed in the December 2020 issue of Vanity Fair. 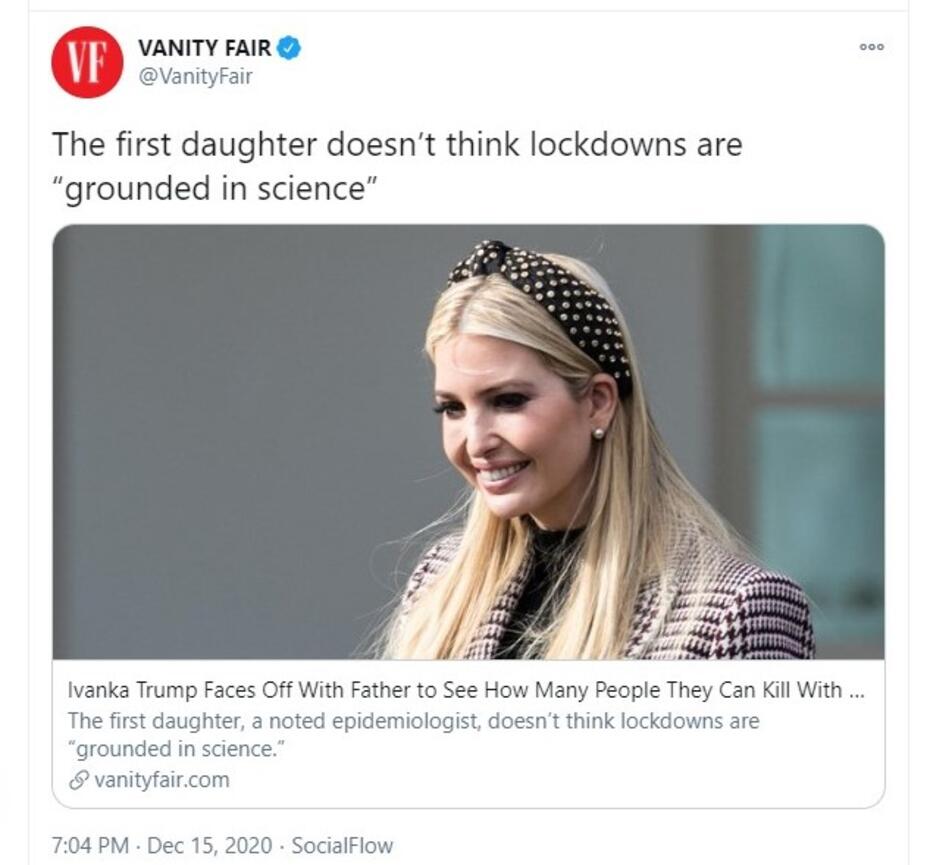 In an extreme over-the-top, even by lib standards, earth-shattering blow, the magazine began by taking a sledgehammer to Ivanka’s pretty blonde head. They sarcastically referred to the first-daughter as a noted epidemiologist, followed by elaborating on why she has no business decrying coronavirus lockdowns as being bogus.

But this wasn’t enough to satisfy the writer of the article, Bess Levin. She had to go where no one should by largely blaming Ivanka Trump, Jared Kushner, and Donald Trump, for the estimated death toll of 450,000 expected to be reached by February.

Thankfully we can tell you this is not the case. But you probably knew this already. No one within the Trump family circle has plans to willfully murder hundreds of thousands of American citizens as one last hoorah before they go.

This isn’t the first time the magazine has set its sites on Ivanka. Just one month ago they ran a story where they quoted an unnamed friend of hers, after having suggested a book for Ivanka to read, said the first-daughter later asked her,  “Why would you tell me to read a book about f–king poor people?”

The latest backlash from the magazine comes as a result of Ivanka’s tweet, “These blanket lockdowns are not grounded in science. These arbitrary rules imposed by callous politicians are destroying lives. It is just wrong for small business owners to have to fight so hard to keep their American dream alive.”

Bess Levin responded to the tweet by saying, “Yes, that’s noted epidemiologist Ivanka Trump decrying lockdowns as the country hurtles toward an estimated 450,000 deaths by February 1, a figure that can largely be blamed on her idiot husband and father.” She kind of missed the entire point of the tweet and she certainly misinterpreted what Ivanka had said.

In the article, Levin quoted a recent tweet from the liberal group Citizens for Responsibility and Ethics in Washington. The tweet read, “rather than turning to doctors and scientists, the closest advisors to the president were his fashion-brand owning daughter and her slumlord husband…This is why we need tighter nepotism laws.”

When it came to the publication running a story about Hunter Biden, their headline read, “Hunter Biden Prepares for His First Solo Art Show Amid Ongoing DOJ Investigation: The president-elect’s son revealed earlier this year that painting ‘is literally keeping me sane.’” 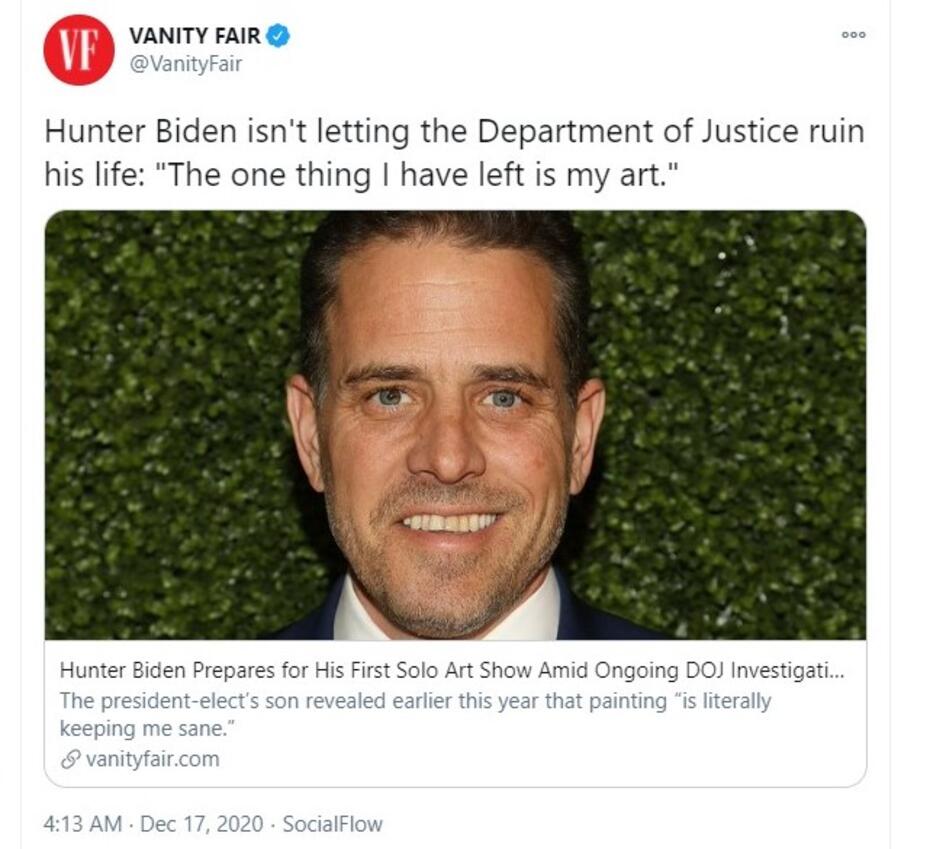 Here is how the article described Hunter Biden. He is a “venture capitalist turned artist, whose studio is in the pool house of his Hollywood Hills home. He’s leaving the family business behind to work with a metal straw “to blow alcohol ink onto Japanese Yupo paper, creating abstract layers of colors and concentric circles.”

Are you done barfing yet?

Liberal publications such as Vanity Fair have no business sticking their liberal noses in areas unfamiliar to them, but if they feel as though they must, they should at least make an effort to get the story correct.

And the Mask Scolds Are BACK

Drag Queens, Yes. Kirk Cameron, No. The Sad State of Our Country

Ford Says NOT to Use Heater in EV Truck During Winter